By the twentieth century, new technological advances and consumer goods improved lives – automobiles, refrigerators, televisions, and of course plastics – but also created more solid waste. In response, massive dumps and landfills became more prevalent. In 1948, the Fresh Kills landfill was “temporarily” established in Staten Island. (It finally shut down in 2008, after briefly closing in 2001, then reopening on 9/11 to handle disposals from Ground Zero.) At nearly 3,000 acres, Fresh Kills was the world’s largest city dump – and the largest manmade object on the planet.In terms of private garbage disposal, by mid-twentieth century, nearly everyone incinerated their garbage. In New York City, apartment-dwellers threw their waste down a chute, and the super burned the garbage when it was full. Backyard incinerators became common in rural areas.

However, incinerators generated smog and toxic fumes. In the second half of the twentieth century, incinerators were gradually outlawed on a local basis: for example, in 1957, Los Angeles banned incinerators to reduce smog; and in 1968, New York City mandated that incinerators be converted to trash compactors. So eventually, this solution for eliminating garbage was itself eradicated.

In addition to incineration, municipalities collected waste with garbage trucks. “Back then it was a filthy job and the trucks leaked garbage fluids down the streets!” one commentator remembers. Household garbage was stored in city-issued metal cans, collected weekly by sanitation workers. Many people threw garbage directly in the can; others used paper bags or paper liners, which quickly became wet and sloppy. Without plastic bags to store the garbage, the metal cans became filthy. “You had to wash out your kitchen trash cans and disinfect them every so often or you’d have a stinking trash can,” says one commentator. Another recalls: “By pickup day, everyone’s cans emitted an odor that was perceivable in the next county!” 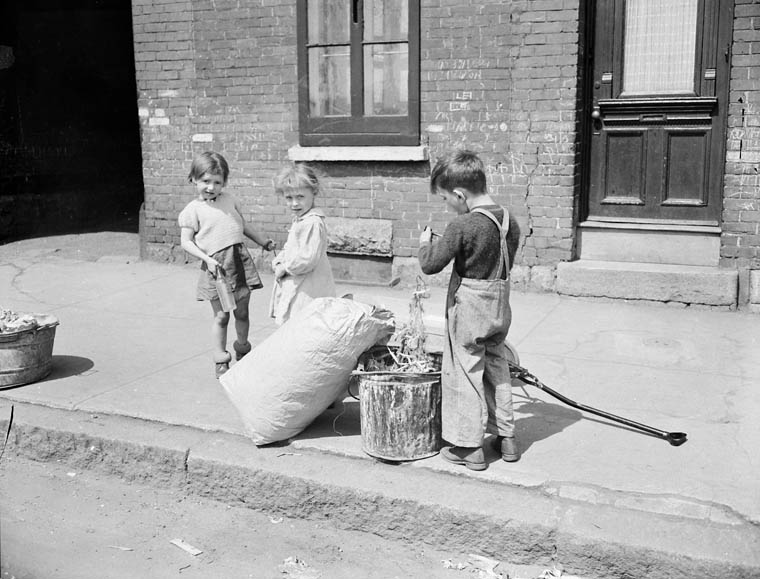 In 1950, Canadian inventors Harry Wasylyk and Larry Hansen invented the garbage bag. Wasylyk created the bag in his kitchen, made out of stretchy, waterproof polyethylene. He pioneered the bags through a process called “extrusion,” converting small resin pellets into bags of plastic – the pellets were heated and pressured to make them pliable, then blown into bags, which were sealed at one end.

The first garbage bags were green, not black, and were intended for commercial use, not home use. Subsequently, the bag’s first customer was the Winnipeg General Hospital, which was trying to prevent the spread of polio. Union Carbide Company bought the bag idea and, in the late 1960s, manufactured the first bag for home use under the name Glad trash bags. It soon added one marketing improvement: the twist-tie (which had already been invented in 1923). Next, drawstring bags appeared in 1984.

The earliest trash bags weren’t reusable or eco-friendly. However, in 1971, James Guillet, a University of Toronto chemist, developed a plastic material that decomposes when left in direct sunlight – coincidentally, this was also the millionth Canadian patent issued. (Clearly, Canada figures prominently in the history of the garbage bag!) In recent years, eco-friendly garbage bags, including recycled, recyclable, and compostable trash bags, offer a more sustainable solution to bag waste.

Trash bags have changed our lives. No longer must we live side-by-side with trash, tolerate waste running down our major city streets, or depend on hogs or vultures to eat our garbage. Instead, bags contain trash in an easy and sanitary manner. It’s one modern convenience we don’t need to overthink – and that’s surely a blessing.