The trash bag may be humble, but this unsung invention has nevertheless had the power to change the way we live.

Before the invention of trash bags, managing and disposing of refuse was a dirtier, smellier, less sanitary, and – to use the technical term – “yuckier” job than it is now. Trash bags have no doubt saved countless lives by containing germs and preventing the spread of disease, and they have improved public health by keeping trash out of public areas. Though many vilify plastic bags for contributing to environmental problems, biodegradable trash bags lessen that role. Indeed, good oil’ trash bags can be viewed as downright heroic.

With that in mind, let’s take a little joyride through the history of North American garbage. (Don’t worry, we’ll keep the windows closed!) 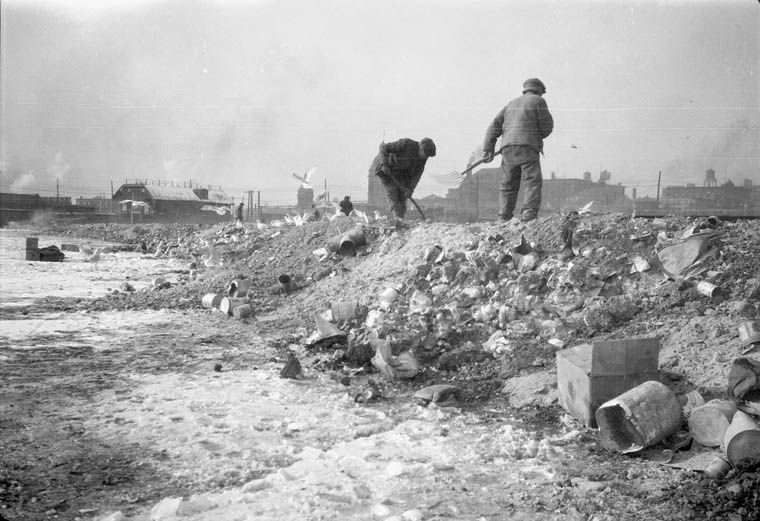 A Toronto dump before the invention of garbage bags.

Early America was expansive, thriving, and kind of stinky. Colonists commonly buried their trash, burned it, or tossed it onto the street, where garbage overflowed and hogs roamed freely. Farmers fed their garbage to their pigs, chickens, goats, or dogs. Another disposal method was ocean-dumping: for example, New York City built a pier on the East River specifically for dumping garbage, and in 1792, Benjamin Franklin used slaves to carry Philadelphia’s waste downstream.

The early republic was an unsanitary place. Garbage rotted in ditches, attracting rodents and bugs; sewage contaminated public drinking water, causing disease. In 1834, West Virginia made it illegal to hunt vultures, because vultures ate the city’s garbage. By the 1860s, rats and cockroaches infested most buildings in Washington, D.C., including the White House. 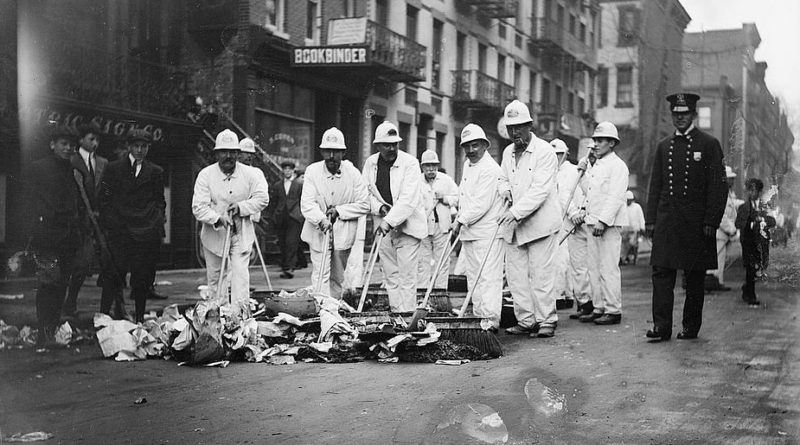 Dumping waste in New York harbor, a common practice in the 1880s.

In 1879, a minister describing the New Orleans dump to the American Public Health Association painted this gruesome picture:

“Thither were brought the dead dogs and cats, the kitchen garbage and the like, and duly dumped. This festering, rotten mess was picked over by the rag pickers and wallowed over by pigs, pigs and humans contesting for a living from it, and as the heaps increased, the odors increased also, and the mass lay corrupting under a tropical sun, dispersing the pestilential fumes where the winds carried them.”

Perhaps to address such scenes, the nation’s first garbage incinerator was built on Governor’s Island, New York, in 1885. By 1908, the United States had built 180 public garbage incinerators – though many were dismantled later due to poor production.

“Germ theory,” or the theory of correlation between filth and disease, became increasingly established during the late 19th century. Thanks to this idea, local governments slowly got more involved with sanitation and filth management – though early efforts focused on wastewater, versus solid waste.

Public apathy, however, stood as an obstacle to reform. Suddenly, though, epidemics woke Americans to the danger of unsanitary conditions: waves of cholera and yellow fever struck the American South in the 1870s. Finally, in 1879, the federal government finally created a National Board of Sanitation.

In 1902, an MIT survey of 161 cities found that 79% of them provided regular collection of refuse. In this era, too, city beautification programs boomed, with white-uniformed members of “juvenile sanitation leagues” volunteering to keep streets and neighborhoods clean.

By the 1920s, booming towns and expanding city limits were spurring soaring waste-collection and disposal costs. Local governments sought relief by sub-contracting out their trash collection services, avoiding the development of a holistic waste-management system. In other words, nobody was asking: “What is the best way to handle our solid waste?” 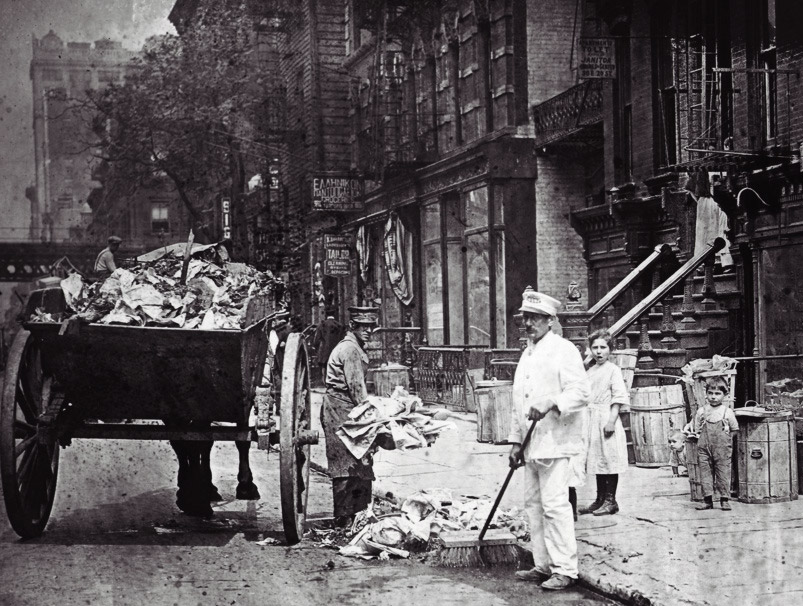 Many townships brought trash to the “town dump,” an open-air dump usually located away from rivers and water sources. During this period, however, the concept of the “sanitary landfill” was born in England: landfills would alternate layers of waste and soil, to reduce odors, vermin, and fires. The first American landfill opened in Fresno, California, in 1934. During this time, “reclaiming” or filling in wetlands near cities with garbage, ash, and dirt, also became popular.

In 1935, General Electric began producing and marketing a garbage “Disposal,” a development that presaged more modern methods of garbage management.