As we know, a few countries has bans thin plastic bags. According to a National Policy expert in Canadian Plastics Industry Association, plastic bag is better appreciated regarding environment than recycle bag and paper one. So, it is unreasonable for us to ban or impose tax on plastic bag.

If a number equivalent to the grocery stores is given, the request for production of paper bags is three times as much as the total original energy while only 1% of restored energy is produced through combustion. Furthermore, the paper bags also produce more waste in landfills. Similarly, if the one-time plastic bags produce 15.5 pounds of waste, the waste papers produce up to 75 pounds (this is a big difference) and even, the plastic bags produce 68% greenhouse gas less than the incubated paper bags. Besides, the energy consumption of plastic bags is not as much as the manufacturing process of paper bags.

Production of plastic bags, paper bags and other bags need energy, but some energy can be recovered if these bags are recycled through the combustion process:

– The traditional plastic bags need just 182,361,4 kcal (calories) to produce, but there are about 2,581.3 kcal which can be recovered through the combustion.

– The bags made from starch and other materials require twice energy (494,741.9 kcal) for production, but the amount of kcal can be recovered is 3,477.5 kcal.

Similar studies compared the volume of material penetrating waste stream in cities, the real number of materials consumed in the combustion process, based on 1.000 paper bags, 1.500 plastic bags and 1.500 compost bags (create an equivalent capability).

– And paper bags create the most waste, nearly 75 pound. 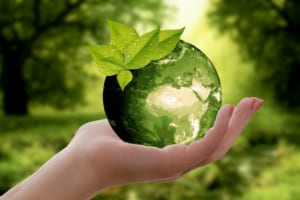 Similarly, plastic bags are also more environment-friendly than fabric bags because the reusable bags are made from cotton and other materials require a significant amount of agricultural land for the production, the production of fabric bags leads to deforestation. It can also increase erosion and lead to pesticide contamination in mixed variety of materials including metals, cotton and other fibers. Britain’s Environment Agency also determined that although cotton bag can be reused up to 104 times, but in fact, average only 52 times. The result is a fabric bag has a 2 times more negative impact on the environment than plastic bag.

Currently, recycled plastic bags have reached a higher percentage than 10 years ago. According to a survey done by Moore Recycling Associates, some types of recovered have an increase of 27 % between 2009 and 2010. These bags account for about 13 % of recovered plastic film and materials in 2010. The figure reached nearly 127 million pounds in 2009.

More importantly, there is no environmental benefit when applying the ban on plastic bags – just potential hazards. Compared with fabric bags, plastic bags require less energy in production as well as in recycling and create less waste in urban areas. In addition, plastic bags also generate fewer greenhouse gas emissions and use less water in production than paper bags.

You can have a look at the links below for more references.